I seek the world’s sympathy in our fight for rights against the unjust rulers.

With this salt I am shaking the foundations of the British empire.

Aerial View of the Dandi Memorial

The 'National Salt Satyagraha Memorial', Dandi, Gujarat, India is conceived as an experiential journey recreating the spirit and the energy of the 1930 Dandi March led by Mahatma Gandhi, and taking the visitors to the Monument step-by-step in order to visualize and understand the history of the iconic Dandi March and the methodology of Satyagraha, which finally led to India’s Independence from the British colonial rule.

In the Lahore Convention of 1929, Indian National Congress unanimously decided to launch India's Freedom Struggle. Mahatma Gandhi was given the baton. During same time British levied staggering 2400% tax on salt, an item of daily necessity. Mahatma Gandhi decided to begin the freedom struggle with this cause of non-cooperation towards the salt tax. Many doubted this cause, but Mahatma Gandhi stood to his conviction & soon message of Dandi March reverberated throughout India.

World has witnessed many freedom struggles, but none as unique as Dandi March. The year was 1930 Mahatma Gandhi decided to protest British Government’s position of tax on salt. The noble path Mahatma chose was that of non-cooperation. Taking 80 marchers with him, he began 390-kilometer-long walk from Sabarmati Ashram to Dandi. Throughout the path, thousands of people came to pay their homage. He taught them the noble way of truth & non-violence. Finally reaching Dandi, they took a pinch salt and the message for India’s independence resounded through the world.

Dandi is my Haridwar

Mahatma Gandhi & marchers began their march from Karadi to Dandi early in the morning on 5th April, 1930 after their prayer meet. Thousands of people accompanying Mahatma Gandhi could feel unique spirit of the Mahatma. His pace had increased multi-fold. On their path first there came Karadi and Matwad twin villages and then came Samapur Village. Large number of people there offered warm welcome to the Dandi Marchers and joined the march. After a brief spell all could experience the cool breeze of Dandi Ocean. Mahatma Gandhi himself praised “Dandi as his Haridwar”, a place of spiritual pilgrimage. They had reached this final destination after 24 Days, along with 80 Marchers, visiting more than 21 places and walking about 390 Kilometer. 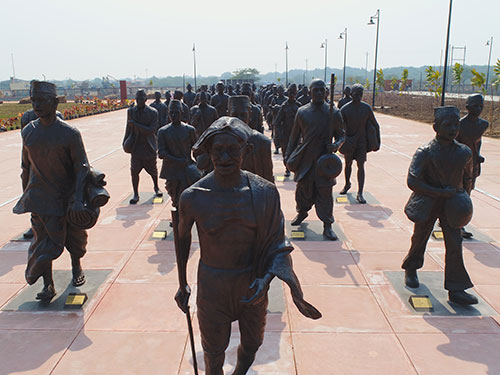 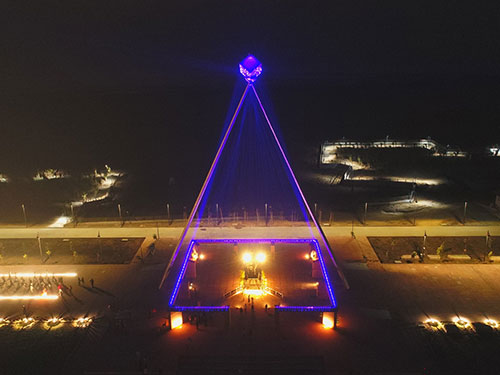 Memorial Timing: 10:00 AM to 06:30 PM Every Tuesday Memorial will remain closed for visitors